You’ve been tossing and turning all night, then after the sun rises, you get dressed, get some coffee and race to your car.  It isn’t a big deal, right?  However, when you get behind the wheel while you are still yawning it might be quite dangerous.  New research shows that drowsy driving might be just as dangerous as it is to drive drunk.

Whether you are getting ready to take a long-distance drive over the holidays, or are pressed for sleep on a regular basis, you need to be aware that even one to two hours of missed sleep might put you at high risk for getting into a road accident. 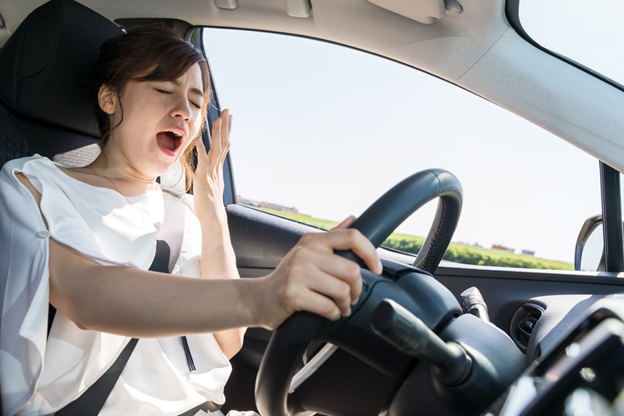 It is very dangerous for drivers to not get enough sleep.  New research has shown that sleeping less than five hours has the same effect as driving drunk when you would need assistance from Houston DWI attorneys.  Drivers with less than four hours of sleep are 11.5 likelier to crash, four to five hours are 4.3 times more likely, five to six hours are 1.9 times more likely and six to seven are 1.3 more likely compared to drivers who have had at least seven hours of sleep during the past 24 hour period.

It was also found in the report that drivers who slept just four to five hours had a crash rate that was similar to the estimates from the U.S. government for the risk that is associated with a driver having a blood alcohol concentration that is slightly above or equal to the alcohol legal limit in the U.S.  There is a much greater crash rate increase that is associated with driving when you have slept for less than four hours.  A UCLA Sleep Disorders Center study found that one beer can affect somebody who has slept for just four hours in the way that a well-rested person is affected by drinking six beers.

It is more likely that tired drivers will be distracted, will react more slowly and more prone to making dangerous decisions compared to drivers who are well-rested.  Obvious symptoms of fatigue including drifting over to the shoulder of the road or opposite lane, not being able to keep your eyes wide open, and frequent yawning.  Sometimes the rumble strip on the road will vibrate so that the driver is alerted when they have gone over the lane markers.  So if you find yourself nodding off, if the following distance is too short, or you are driving past your time, then you know it will time for you to take a break and rest. 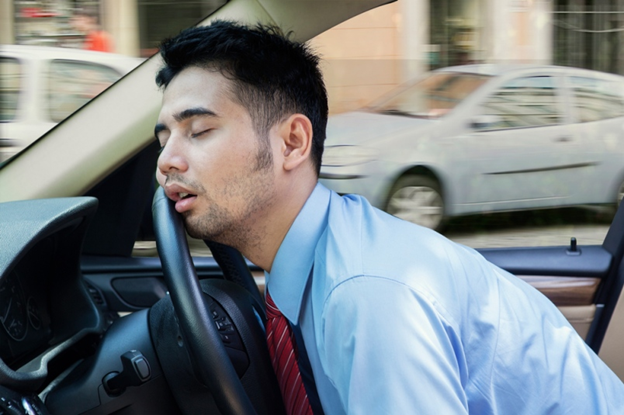 However, according to the study, over fifty percent of drivers who get into fatigued-related crash do not experience any symptoms before they fall asleep while driving.  There were many drivers who didn’t recall nodding off but are too embarrassed to admit it.  That makes it hard to figure out what role of fatigue plays in an accident.  In addition, a majority of states do not have a code on the crash report forms that would show that a driver had fallen asleep. There is also not a central database for tracking sleep deprivation as being the collision’s underlying cause.

Thousands of fatalities per year are the result of fatigue, and it is also underreported.  Crash rates really go up when individuals who have been up for 15-18 hours.

Acute sleep deprivation is very common, particularly for people who work on the night shift, parents who are caring for a sick child, business travelers, pilots, doctors on-call, and students.  The leading cause of work-related deaths is car accidents.  People in our society are burning the candle at both ends.  Work isn’t only eight hours per day any longer.

The Centers for Disease Center Control and Prevention conducted a survey that showed that 35 percent of adults sleep for under seven hours per day and 12 percent sleep for five hours or even less.  Also, some over-the-counter and prescription drugs such as cold medicine have drowsiness as a major side effect.

However, knowing that sleep is crucial to being safe on the road isn’t sufficient for changing the behavior of drivers.  It was found by the AAA that  97 percent of all drivers view drowsy driving as a threat to safety, but almost one-third of individuals admitted to having a hard time staying awake in the previous month while driving.  Many people also don’t recognize being drowsy.  The UCLA Sleep Disorders Center reports that individuals who are drowsy frequently don’t realize it.  That makes it even more dangerous being dangerous.  Being drowsy has effects that are very similar to the effects experienced when drinking alcohol.  That is due to the fact that it is difficult to know for certain when somebody is too tired to be able to drive.  It is much harder to identify drowsy driving compared to drunk driving.

It isn’t as simple to catch up on sleep as getting a catnap, according to research.  If you don’t get enough sleep, that means you have a sleep deficit.  The deficit continues growing as you keep adding more hours worth of missed sleep to your deficit.  The more sleep that you miss, the more difficult it will be for you to perform and think the way you want to.

When can the risks of trying to operate on a sleep deficit be overcome?  It is recommended by the AA that you take a break every 100 miles or every two hours or so, travel with a passenger to help share in the driving or help keep you awake and avoid taking any medications that might cause drowsiness.  If you still find yourself starting to fall asleep while behind the wheel, you should pull over and take a nap.

Since that accident he was involved in 2009, Paul has been an active advocate of safe driving. He often ate a ds seminar related to his advocacy. He is also interested in cars and different things about automotive.