Whether you just like the idea of scuba diving and want some ideas on where you could do your first dive or, you are already a seasoned multiple dive fanatic there are always unique places to go. One of the beauties of scuba diving is that there are so many places to discover, there are also places that no person has ever been before, for now though, here are some examples of the most desirable scuba diving spots;

The Yongala in Australia

If you like something really unique then you’ll love The Yongala, it’s a shipwreck off Queensland’s coast, situated on the North-eastern side of Australia. You will get the chance to see manta rays, sea snakes, octopuses, turtles, bull sharks, tiger sharks, clouds of fish, and some beautiful coral that covers various parts of the wreck and its surroundings.

The Dibba Rock in Fujairah

Dibba Rock is one of the UAE’s oldest marine protected zones, with a profusion of life unrivaled in the region. Because it is one of the UAE’s best dive sites, it is typical to observe turtles, sharks, cuttlefish, and a wide range of other species when the conditions are ideal.

The Blue Corner Wall derives its name from an upwelling, which means that this fantastic wall dive is favored by a variety of exotic fish that live in the water column (not at the bottom of the ocean or near the shore). There is also the opportunity to see sharks, barracuda, eagle rays, Napoleon wrasse, and snappers are also possible sightings depending on the day. If the fish aren’t enough to feast your eyes upon, the wall is covered in thick coral, which is home to moray eels, nudibranchs, and mantis shrimp, to name a few.

The Richelieu Rock in Thailand

This spot in Thailand is famous because, at low tide, a horseshoe of rocky pinnacles can be seen as it just breaks the surface. There are various videos on TikTok that show Whale shark sightings are common, but the area is also home to large schools of pelagic species like jacks, barracuda, and batfish. Mantas can also be observed, and it’s a great place for Macro photography, with ghost pipefish, harlequin shrimp, frogfish, and seahorses among the animals.

The Thistlegorm in The Egyptian Red Sea

The Thistlegorm is another shipwreck, this one though will require multiple dives to do any kind of justice. The Thistlegorm (Blue Thistle) was a British ship that was attacked from the air and sunk in 1941 while carrying a cargo of war supplies: weapons, motorcycles, train carriages, and trucks. The currents can be powerful and come from numerous directions at the same time, therefore this is usually reserved for advanced divers.

This dive has underwater lights installed on the ocean floor to attract an endless amount of plankton, which in turn attracts the massive, yet jaw-dropping manta rays off of the shore of Hawaii. The rays get so close to you that you have to move frequently to prevent being hit by them. If you don’t mind a bit of risk then this is an incredible, unforgettable experience with one of the most beautiful animals on the planet. 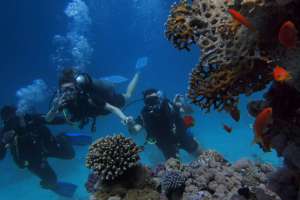 Shark and Yolanda Reef in The Egyptian Red Sea

Really good value for money as you get, three dives in one: Including Anemone city, Shark Reef, and the Yolanda wreck. Drift dives and pelagic fish are both possible because of the currents that flow along this passage of water. Usually, the dive will start at Anemone City and then to the Shark Reef and finally the drop-off to Yolanda’s wreckage.

The Barracuda Point is a coral wall where sharks cruise by and dozens of barracuda surround you. If you can stomach the odd powerful current that rips through an underwater grassland, you’ll be certain to view a lot of wildlife species. White tips, turtles, grouper, jacks, bump head parrotfish, and, of course, the barracuda that gave it its name are all available to see, a memory of a lifetime.

Navy Pier, Off of Western Australia

This T-shaped structure stretches 300 meters from the beach as long as it is broad, including two moorings for larger ships to tie up to. Despite being a well-defined and confined location, you could spend a week or so diving there and not get bored, especially at night.

If you go to this location, you will likely see nudibranchs and flatworms, eels, woebegone and white-tipped sharks, octopuses, lion and scorpionfish, and stargazers can all be seen on each dive. Be careful though, as you’ll occasionally stumble across enormous rays resting in the sand but, they’ll probably be more surprised of you than the other way around.

That should be enough

For any diver, beginner or expert, that should be more than enough to go on, now you have the ideas, who will you go with?