To most people, entertainment is synonymous with movies and music. However, in the recent past, gaming has gained massive traction in popularity and revenue. Gaming is not an entirely new concept. However, it has undergone tremendous evolution since the 80s. In the early years, gaming was more prevalent among kids and teenagers. Although young people still play, the gaming scene has dramatically diversified and improved in quality. Here are some of how gaming has changed people’s opinions about entertainment.

A few decades ago, gaming was only a way to pass the time. Did you know that the video game business generates more income than both the music and movie industries combined? Mobile gaming generates the most revenue, closely followed by console gaming.

Many gaming companies are traded publicly. You can watch their growth through stock ratings. Some of the income sources include brand endorsements, online advertising, and streaming services. Besides, people have created lucrative careers out of gaming. Competitions held worldwide come with prizes, some even worth millions of dollars.

Gaming has opened endless opportunities for creativity. Notably, today’s generation loves convenience in all aspects of life. Entertainment is no exception. Through technologies such as virtual reality, people can play video games in a simulated environment. These platforms have enhanced interactivity, giving someone an incredibly fantastic experience. Who would have thought it’s possible to be somewhere without actually being there?

Gaming has greatly impacted the entertainment realm by providing something for everyone. While most of the gamers are young, older people are not far behind. Gamers are spoilt for choice with hundreds of games to choose from. Besides, the games have varying options such as single-player and multi-player, further expanding the scope of entertainment.

Again, games are an inseparable part of parties. Since parties bring together people from all walks of life, a few games could keep everyone busy and entertained the whole time.

Gone are the days when theatres were the only sources of entertainment. Thanks to trends in the gaming industry, people can now access entertainment anytime, anywhere. Better still, more and more online gaming sites are making their websites compatible with smartphones. As opposed to desktops, smartphones are less bulky and convenient to carry around.

Besides, people can access these games from anywhere in the world, as long as they meet the set requirements. Players can even compete with other players regardless of the geographical barriers between them.

Over the years, gaming has developed into a genre of entertainment that no one can miss. Game designers don’t hesitate when it comes to matching prevailing trends. Besides, even prominent people have joined the bandwagon, including renowned athletes. When someone sees their favorite athlete playing a particular game, they too want to try.

There are endless games with top-notch creativity. However, playing with real money adds to the thrill. For instance, people can gamble online with real cash. Better still, gaming sites have gone the extra mile by accepting safer payment options such as cryptocurrency. These sites guarantee users the safety of the transaction details as well as financial records.

Every industry bears unique business opportunities. Gaming is no different. Since there are laws governing gaming, companies have come up with services to ensure that only bona fide users access gaming sites. For instance, online gaming is legal in some states and illegal in others. Therefore, gaming sites use geolocation services to ensure that only people from allowed countries access their services. In so doing, the geolocation service providers make profits. 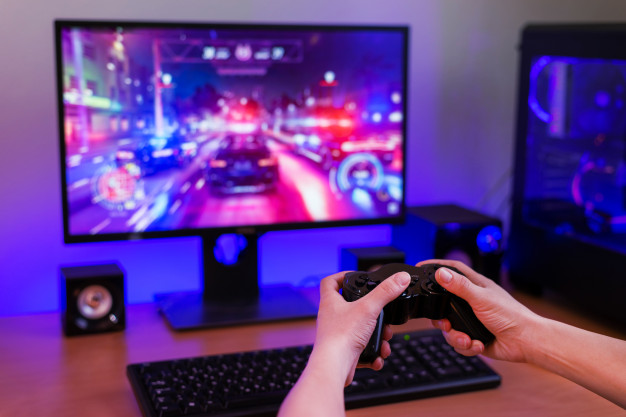 In 2020, the world was hit by an unprecedented pandemic, COVID-19. Like any other industry, the entertainment world was greatly affected. More so, the lockdown saw more and more people spend more time indoors. However, gaming came in handy, helping people cope with boredom. Besides, since schools were closed down as well, parents could bond with their children over various games.

What the Future Holds

Gaming is giving conventional forms of entertainment a run for their money. Having moved from a hobby to a priority, it is an industry to look out for. Around 2 billion people worldwide take part in gaming, even though some don’t consider themselves gamers. The industry is so promising that eCommerce giants such as Amazon have taken an interest. The gaming future sure looks bright.