FIFA has become one of the leading titles throughout the years when it comes to sports simulation video games. The series sold close to 300 million copies so far, and it’s not showing any signs of stopping. FIFA is, without a doubt, one of the most popular video games right now, connecting millions of soccer fans into a vivid community of fans.

The game had to go through a long and bumpy road to get where it is today. Even EA Sports expected the game to fail back in the day. Stay with us and allow Gift Card Sock to take you through each stage in FIFA’s evolution and look back on the past 25 years’ most significant changes.

Where It All Began

The very first FIFA game was released in 1993, and it was called FIFA International Soccer. EA’s first FIFA sports simulation was made by a company that only made simulation games of popular sports in the US.

The company thought that FIFA wouldn’t become a hit since soccer wasn’t very popular in the States. EA spent only around $30.000 to make the game, which was a super small budget compared to today’s $400 million. The first copies of the game were sold worldwide in early 1994, but the final figure wasn’t enough for EA to continue with the franchise. The guys at Gift Card Sock still remember playing FIFA International Soccer on their old SEGA Genesis consoles. They all agree the game was fun back then.

Everyone forgot about FIFA International Soccer by 1996, which is about the same time when PS1 was released. It was also the turning point in gaming because most titles made a switch from 2D to 3D graphics. The first 3D engine was born, and the developers at EA had a huge plan for the future of FIFA.

The release of FIFA 96 was more than successful. Along with  3,000 real player names, soccer fans worldwide recognized the massive improvement in gameplay and graphics. The following year, FIFA 97 hit the market as an improved version of the previous game. Gift Card Sock remembers playing the indoor football mode in full 3D like it was yesterday. After the success of FIFA 97, EA decided to keep the franchise going with annual releases that were going to be gradually improved over time.

There was a massive hype around the World Cup taking place in France in 1998. Everyone talked about soccer, and EA decided to put out a title that defined the series even further. FIFA: Road to World Cup 98 brought new details, improved graphics, and a better experience overall. EA included many new realistic teams from countries all over the world.

But when someone says FIFA 98, most people, including the guys at Gift Card Sock, remember the theme song right away. FIFA is probably one of the reasons why Blur’s Song Two is still a hit decades later.

FIFA 99 was a copy of the previous game, but without the indoor football mode, so it wasn’t that revolutionary. However, FIFA 2000 is a different story. Apart from adding new teams, including the entire English 3rd league, FIFA made its way into eSports with the first official FIFA tournament taking place in South Korea. 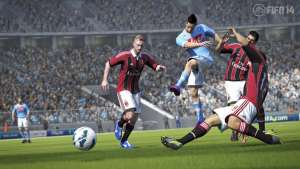 The Next Big Step

Even though FIFA 2000 didn’t introduce any massive changes, EA showed no signs of stopping. FIFA 2001 added features like the shooting power bar and customizable kits. FIFA 2002 showed considerable improvements in player movement and dribbling, but it couldn’t shine because of Pro Evolution Soccer made by Konami studios. FIFA was behind with the graphics and realism but offered better gameplay overall.

The next big name in the series is FIFA 2006. Everything the game offered was completely overhauled, and the Team Chemistry feature was introduced. Gift Card Sock loved this game so much; most guys there played it until FIFA 08.

That’s when the first FIFA single-player campaign was first released, which made a massive change to how the game was played. Instead of controlling the entire team, players could now control only one player and build a successful professional career. The huge potential led to the release of The Ultimate Team mode in FIFA 09, which is still the most lucrative game mode EA ever made in any game. The next 4 FIFA games followed the same recipe of FIFA 09, but with small improvements in gameplay and graphics.

Over the next few years, EA kept pouring money into FIFA, improving it everywhere where improvements were needed. The AI got better, the community grew steadily, new modes made it into the game, and players worldwide loved it.

Today, FIFA offers a massive base of real teams, leagues, online matching, and many other features that make it the most famous soccer simulation in history. Gift Card Sock still holds FIFA tournaments at the office – the winner gets bragging rights for the entire year.

A Game For True Soccer Fans

In short, Gift Card Sock loves FIFA, and so do millions of players all over the globe. FIFA is a huge thing everywhere, with international tournaments, a huge online multiplayer league, and constant updates that further improve the experience.

FIFA 21 follows the same recipe, but today, the game looks almost real, and the attention to detail is impressive. Visit the Gift Card Sock shop and surprise someone with a FIFA gift card!