Honey bee populations are declining throughout the world. National Geographic warns that some regions have seen their local bee population decline by as much as 90%. This problem has made the entire world take notice and has motivated sustainability efforts from some unlikely sources.

The honey bee population in the United States is stable overall, and that is the good news. The bad news is that the overall population does not reflect how severe the problem is in certain regions. Consider the New England region, which has had 14 bee species that are critical to pollination decline by as much as 90%. Bee experts are particularly worried about a phenomenon known as colony collapse disorder, which is where the worker bees die or disappear and set off a chain reaction that undermines the colony. While murder hornets have grabbed headlines, heavy use of fertilizers and pesticides has caused the most damage.

In order to fix the problem, we need to maintain the environment in a manner that does not undermine bee and other insect habitats. At least five U.S. Internet service providers are helping with that.

AT&T has a social responsibility program in place and has created a sustainability roadmap through 2025. Recent changes it has made to minimizing waste and recycling have been substantial. The company has placed an emphasis on providing customers with sustainable technology. It is also reducing emissions, investing in renewable energy, and upgrading its infrastructure. The infrastructure upgrades not only minimize the environmental footprint but are designed to withstand negative climate change.

Frontier has implemented a number of green initiatives. This includes allowing its call center employees to work from home, which greatly reduces emissions. For those who do have to travel to their sites, it offers spending accounts for public transit in order to motivate employees to use those means. 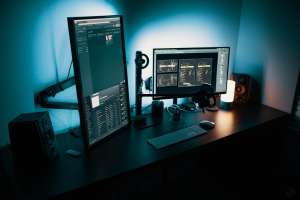 HughesNet may be the most active ISP when it comes to green efforts and has been for some time. It even earned a prestigious award from the Alliance for Workplace Excellent for its eco leadership. The company received the award for a program called the Green Committee. It allows HughesNet employees to focus their efforts based on the specific needs of the communities in which they live.

Spectrum has made similar efforts to AT&T when it comes to integrating sustainability into its infrastructure. Its Connecticut-based headquarters recently achieved LEED Gold status, which is no small feat. Spectrum’s next major project is the research and development of technologies that will significantly reduce the environmental impact of its 30,000-vehicle fleet.

In 2019, Verizon introduced the first green bond in the industry. A green bond—also known as a climate bond—is a financial instrument that encompasses funds that are specifically earmarked for environmental and climate-related projects. As with AT&T and Spectrum, much of the focal point thus far has been reducing the environmental footprint of its infrastructure.

How You Can Help

Amateur beekeeping is a popular trend and is particularly beneficial in the regions where the decline is greatest. But keeping bees is not the only option. You can create a bee garden with flowers and trees to which bees are drawn. It may seem like a simple thing, but one of the greatest challenges facing our bees is the lack of suitable habitats. There may also be opportunities in your local area to donate native bee homes to schools, businesses, gardens, and other locations.

Read More: What is High-Speed Internet?