The best gifts of life are the ones that occur out of mere happenstance. Like a friend’s wedding turned into an adventurous expedition. For someone with an undying wanderlust like mine, such happenstances are treasured gifts from life! It was last year when I was in Trivandrum for a wedding ceremony. After all the events of the wedding day, we still had a couple of days to spend before heading back home. To make the most of the trip, a couple of friends planned a tour of the beautiful forest village called Gavi. Not many people know about this place since it has been a restricted tourist area and until the recent years, has remained untouched by the mainstream media.

Gavi at a glance

To reach Gavi, we had to first reach Sabarimala. So, we booked a cab from Trivandrum to Sabarimala and started really early in the morning. It was quite a long drive but the time just flew by, while driving through the mystical beauty of the lofty hills and dense forests. On the go, I did some blog reading and learned that Gavi is popular among naturalists and is high on ecotourism. The forests are a part of the Periyar Tiger Reserve. With the regional wildlife facing endangerment, this has become a restricted tourist area and requires permission to explore the forests. Travelers could also rent pre-permitted vehicles from the nearby towns of Kumily and Vandiperiyar.

Although we had availed a licensed and top-rated car rental in Trivandrum, we had to drop by the Forest Department checkpoint and get a permit to enter. We were also given a set of guidelines to follow while exploring the forests and told that we could encounter a wild animal anywhere, anytime, so we had to keep an eye on the road, avoid making loud noises or honking. That was when we all knew that we were going to have an entirely different experience was awaiting us. 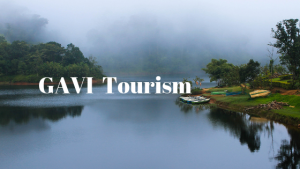 A tour of the forest

As we continued to move deeper into the woods, it felt like an enchanted land, alienated from the material world that we know of. Soon, the cellphone tower was out of range, an indication that this zone was still pure and very much a part of nature. The entire region was a refreshing collage of hills, valleys, grasslands, and meadows, boasting the most unadulterated beauty that we had ever seen.

The further we moved into the interiors, the more tranquil it became. Tall trees of sandalwood and eucalyptus canopied the sky, keeping the sunlight away from most parts. The overall ambiance was peaceful and we tried to maintain the silence by keeping our car speed at the minimal. On our ride through the narrow forest trails, we spotted a herd of elephants walking alongside our car. Soon enough we managed to get a sighting of more animals, like, the lion-tailed macaque, and a variety of birds like woodpeckers, hornbills, and even kingfishers. Around the grasslands, flocks of ibex were pasturing. Most explorers claim that these forests are a great destination for bird watching.

We kept following the main forest trail as per the map provided to us at the checkpoint. We passed the eco retreats and camping areas and soon, we reached the Gavi Lake, the main water body of the forest. We made our first stop there and explored the surroundings. There were boating facilities also for tourists. The still and crystal clear water reflected the lines of trees which converged at one point in the horizon, giving it a mirror-like effect.

The map showed us some prominent plantation zones with dense groves of cardamom and coffee. When walking around, one could get a faint whiff of spices and woody scents from the herbs and many other medicinal plants that grow here naturally.

We visited a cardamom plantation and its adjoining factory on the other edge of the forest.

It was past noon but there was still a faint layer of mist and the air inside the forests were cool. As the day rolled into evening, the sights and sounds of the jungle changed and we could hear the symphony of crickets and other animal sounds, mixed with the evening calls of birds, retreating to their nests, and a vibe that said that the nocturnals would soon awake to rule the jungle.

We retreated the same way, only much more cautious and slower, listening to the music of the wilderness and savoring the enchanting beauty of the darkness.

Gavi turned out to be the best gift of that vacation. Little did I imagine that a wedding vacation would turn out to be an experience so rich that I would savor it more than my friend’s biggest life event!