Outdoor televisions are getting more and more popular as people realize that having an entertainment system outside the house is infinitely better. Not only can people enjoy the ambiance, but it is also actually healthier to stay outdoors. Fresh air is good for the physical and emotional well-being of a person. So take the entertainment outside the house and make sure it is protected with Garnetics. However, here are some things that you ought to know first before you buy an outdoor television.

So there is a reason why it is called outdoor television and not just television. It is essentially more heavy-duty than regular television because it is meant to sustain the different natural elements outdoors. But while it is stronger than its indoor counterpart, your outdoor flat-screen TV will still need weatherproof protection. One factor where outdoor TV differs from the indoor one is the brightness. The television made for your patio or outside entertainment is tested with the environment’s natural lightning. An indoor television will have a different brightness configuration as manufacturers consider its containment inside the house. So an indoor television brought outside is not going to be as enjoyable as a LED, LCD, plasma screen made for the outdoors.

Another important factor is the sound. Indoor TV screens will never be loud enough for the outdoors as manufacturers shaped them based on the fact that it will be within the four walls of the house. The outdoor flat screen, on the other hand, was tested to contend with the noise of the outside world: from nature’s sounds to engine sounds and even human sounds. The volume of an outdoor television is made exactly right for the outdoors.

The bigger the better

Since you are going to put your television outside the house, make sure it is also bigger: at least 55 inches in size. Anyway, outside TV covers are versatile so there is always the right size for your plasma television or whatever outdoor set you choose. There are also appropriate wall mounts based on the size of your television set.

The bigger outdoor space also means you can invite more guests to socialize and bond with. That’s why setting up speakers will be infinitely better.

Make sure your TV is protected with patio TV covers

Just like an outdoor television is different from a regular television, outside TV covers should also be different from the ones you use for the entertainment system you keep inside the house. Outdoor TV covers are also generally made from a sturdier material that could withstand any weather condition. If you live in a place that enjoys all four seasons, then you definitely need a TV cover that can hold out during winter where the extreme cold could create condensation on parts of the television. Great outside TV covers will protect the television from condensation as well as possible short circuit due to humidity when the weather is too hot. During incessant rains, since the patio is an open-air venue, showers could reach the TV set.

Patio TV covers will also protect your entertainment set from mildew and should be thick enough to prevent scratches. Of course, dust is an enemy for both indoor and outdoor television. Your regular TV cover will be enough to protect the television from dust and patio TV covers are even better at that. 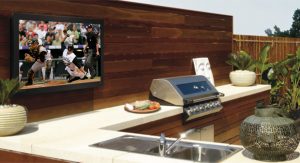 Get a smart TV

There are so many advantages to having a Smart TV, but here is a practical one: You don’t need a remote. The thing about remote control is that it is very easy to lose. At least, when you are indoors, the lost remote is bound to stay inside the house. However, when you have a television set outside, there are way too many reasons to lose the remote and the area is too big to scour through. If you have a dog, it could easily play with the remote and take it to the gardens. If you have a pool, your remote could end up swimming there and you won’t even know how it happened. But with a Smart TV, you use your smartphone to control your entertainment set and choose whatever it is you want to watch.

But for other obvious reasons, well, you can watch YouTube videos and your favorite movies or series from popular apps like Netflix, Hulu, and Amazon.

Complement your outdoor TV set with some comfy furniture

Now that you know a lot about outdoor television and you are already convinced that you should buy one, make your patio the most comfortable place ever. What’s the point of having a great entertainment system when you can’t even relax in the place because of terrible furniture? So make sure you equip your patio with cozy outdoor furniture. Again, emphasis on the outdoor. You can’t just buy any kind of furniture because you want something that could last through all four seasons. Just like your television, choose all-weather outdoor furniture.

Choose also a set that is easy to clean because there is more dust outside the house. Among the outdoor furniture materials that could withstand different weather situations and are easy to care for are metal, wicker, resin, and teak. To make furniture comfortable, find soft cushions for your chairs if they are not included in the set. This way, you can match the cushions with the overall design for your patio. Throw pillows are also the best way to keep your space vibrant in any season because you can easily update the look by changing the pillowcase.

There you have it, folks! You can now make the patio your very own entertainment center at home. Make sure you measure your space before you buy the television and your furniture.