The telecom realm is primarily run by two renowned behemoths Spectrum and AT&T. Both the companies have widespread wings in a major residential and business domain of the United States. Spectrum currently services 40+ states while AT&T internet confers connectivity to 20+ states.

Surely, every household level internet user or a business seeking internet connectivity to power up its services has heard of either or both providers. But in the end, they have to choose one ISP. To help you decide better, we have jotted down this cursory overview of each provider’s service plans, prices, bundles and the additional perks they have to offer. 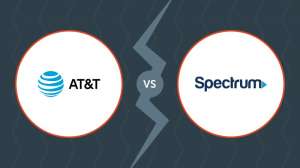 Spectrum also recognized as TWC Spectrum, is the crux of the biscuit for cable broadband. But AT&T Internet is the ruler of two different internet types (DSL & fiber-optic). All three internet types have different levels of connectivity power, broadband power and so the prices vary, as well.

AT&T gives its subscribers two full-fledged internet services options. Those who prefer their internet the old-school way resort to DSL connections but the ones who have a whole household to power up with high-speed internet then choose AT&T’s fiber internet plans that escalate the speeds to 1,000 Mbps.

As for Spectrum, you only get fiber-backed cable internet but in comparison to standalone fiber broadband, Spectrum’s internet speeds also touch a good 940 Mbps. The only difference being, AT&T’s internet plans are relatively cheaper than Spectrum.

Now on to the main deal – do these two give free equipment? If not, what do they charge? AT&T Internet plans include a wireless gateway router. This isn’t only for a high tier plan rather all plans have this feature.

Spectrum doesn’t ask for additional charges for a modem but the router can be purchased or could be rented out.

Internet offerings by both providers won’t be laggy for gaming and streaming alike. But if you are using a DSL connection that doesn’t exceed any more than 10 Mbps then you will be stuck with sluggish speeds.

Cable and fiber broadband both are quite speedy for Spectrum and AT&T. The up to 1,000 Mbps range and up to 940 Mbps range suffices if a mere few minutes is what you need to download files, play multiplayer online games and have excessive files to upload.

Now on to the wrath of data caps. What sets Spectrum apart from AT&T is its standard no data caps policy. Whether a standalone plan or a bundle, you won’t have to ever worry about exceeding the data caps as there isn’t one.

On the other hand, AT&T doesn’t have any such policy. The standard data cap limit for AT&T is 1 TB that you will find on most of its plan. But unlimited data isn’t available on every offer by the provider but only one certain plan.

We did the research end of things for you. Now all you have to do is make the right decision. Each provider comes with its own set of pros with a sprinkling amount of cons. So, good luck with selecting it!