Sydney Harbour is one of the most beautiful working harbours in the world. The views are famous across the globe; the silhouettes of the Sydney Harbour Bridge and the Sydney Opera House are instantly recognisable.

While there are many ways to experience the beautiful sights and famous Sydney landmarks, one that is often overlooked is the vantage point gained from a kayak. The many tributaries and connected waterways make Sydney Harbour a boater’s paradise, and you can find all manner of vehicles on its waters, from yachts to canoes and everything in between. Paddling around these iconic sites allows you to experience the harbour and all of its famous elements in a whole new way.

After eight years of construction, the Harbour Bridge opened in 1932. With its grand opening occurring in the midst of the Great Depression, the bridge became known as the “Iron Lung” because it kept so many men employed during the tough financial times. At 134 metres from water level to the top, the structure nicknamed “the coathanger” is still the world’s tallest steel arch bridge.

The hike up the bridge is a rite of passage for area residents and a must-do for visitors. However, arguably the best way to experience this landmark is by participating in one of the many kayaking adventures through Sydney Harbour. This provides a vantage point of the incredible structure that you don’t get any other way. Gliding through the water with 52,800 tonnes of steel above you is an experience that cannot be replicated.

The Sydney Opera House was completed in 1959; the construction process was predicted to take four years but ended up taking 14. Topped by nearly 1 million roof tiles, the exterior of the building is absolutely breathtaking. The building was placed on UNESCO’s list of World Heritage sites in 2007 and is the youngest building to be included on the list that includes the Taj Mahal and other historic architectural achievements.

Visited by nearly 11 million people each year, the Sydney Opera House is one of the most photographed landmarks in the world. One of the most unique perspectives of this famous spot can be obtained from the harbour, with the beautiful Sydney Harbour Bridge framing the beautiful structure. 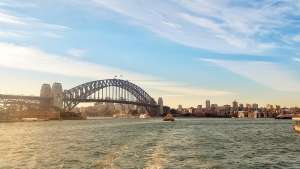 Rose Bay was an international aerodrome site until 1955, with seaplanes taking off and landing on a daily basis. Today, Rose Bay Park boasts a scenic park with playgrounds, covered picnic accommodations and a popular sandy beach. If you plan to engage in a Sydney Harbour paddle trip, Rose Beach is a common location to begin and end.

Named for the milk deliveries that were made to the historic Strickland House via waterway, Milk Beach sits at the base of Hermit Bay, adjacent to Sydney Harbour. Access to the beach is limited but can be easily reached through a Sydney Harbour paddle excursion. A beach is a great place for swimming, snorkelling, photographing the lovely views of the Harbour Bridge and Sydney Opera House, and checking out the sandstone rock formations.

Measuring 150 metres by 200 metres, Shark Island is a small piece of land in the middle of Sydney Harbour. While there were some reported shark sightings and captures from Shark Island in the 1800s, the island actually gets its name from the island’s shape, which resembles a shark. Sections of the island were designated as a recreation reserve in the late 19th century. The island was also utilised as a naval depot and a station for quarantined animals until the 1970s. Since that time, it has been a part of the Sydney Harbour National Park and is used exclusively for recreation.

While a ferry service can transport you to Shark Island, the best way to see it is by taking part in kayaking adventures and paddling to the island for a picnic. While there, you also want to check out the island’s active pile lighthouse, the Shark Island Light, which has been in use since 1913.

Sydney Harbour contains amazing historic sites and natural wonders that should not be missed, but even better than a walking tour or bus tour is a kayak tour that combines a workout and an excursion into nature with sightseeing. Some of the best vantage points to view these famous locales can be found on the water.