Tom Brady signing with the Bucs has been the biggest offseason buzz in the NFL since…well…forever. And the Bucs weren’t done because once TB12 flew the Foxboro coop and landed in sunny Tampa Bay, the other shoe to drop was trading for his fellow future Hall-of-Fame teammate, Rob Gronkowski. Yes, Gronk came out of his one-year retirement for one reason and one reason only, to play catch with the greatest passer who ever laced up the cleats, Tom Brady.

However, the Saints are the class of their division and should be just as good this year as they were last year in their 13-3 regular-season campaign. Even the oddsmakers agree as evidenced by New Orleans is listed as a +110 favorite to win their division, followed closely by the newly retooled Bucs at +120. To be fair, there’s little doubt the Bucs have improved and this won’t be the cakewalk that it was for the Saints last year when they won the NFC South by a full six games and went 5-1 against their division rivals. However, as the Bucs improved in the offseason, so too did New Orleans.

New @Saints wide receiver @ESanders_10 knew the whole time he wanted to be in The Big Easy.#Saints | #NFLFreeAgencypic.twitter.com/9fzs54503Q

New Orleans gave Drew Brees another quality weapon when they signed Emmanuel Sanders to complement Michael Thomas as the newest dynamic duo down on the bayou. But New Orleans also bolstered their offensive line by selecting Michigan center/guard Cesar Ruiz in the opening round of the NFL Draft and pounced when Wisconsin linebacker Zack Baun was available in the third round after many of the draftniks projected him to go late in the first. Lightning struck twice for the Saints when arguably the best tight end in the draft, Dayton’s Adam Trautman, was also landed in the third round.

It was a draft class of quality over quantity as the Saints only had four picks this year (the above three plus Mississippi State quarterback Tommy Stevens) and it made a very good team even better. As long as Drew Brees continues to play at an elite level at the age of 41 then we can expect to see an offense that is as deadly through the air as they are on the ground with twin terrors Alvin Kamara and Latavius Murray running the ball. 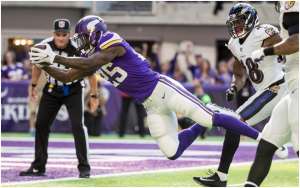 The New Orleans ground attack averaged a pedestrian 108.6 yards per game but that number is deceptive because both tailbacks, Kamara and Murray, are used as outlet receivers coming out of the backfield which means more focus on the pass and far less on the run. Ultimately, this approach inflates the passing numbers but diminishes the number of rushing yards.

Defensively, the Saints were ranked No. 4 stopping the run but were in the bottom third of the league defending the pass. They will have to do better this year and to that end brought back veteran safety, Malcolm Jenkins, after he fled New Orleans following his fifth season and spent the next six years with the Eagles. He will be a calming influence in the secondary and will help make the Saints tougher on opposing receivers.

New Orleans’ schedule is ranked 24th this season as they are playing opponents that had a .490 winning percentage in 2019. One of the most critical games on their schedule begins in Week 1 when they host Tom Brady and the Buccaneers. All eyes will be watching that battle and these two divisional rivals will do it all over again in Week 9 when the Saints travel to Tampa Bay.

A meeting against the Packers in Week 3 at the Superdome is another bare-knuckle brawl with an NFC power followed by a game against the NFC champion 49ers in Week 10. A trip to Mile High against the Broncos in Week 12 shouldn’t be dismissed as a gimme game and things only get more difficult when they face the Eagles in the City of Brotherly Love in Week 14. Weeks 15 and 16 will see the boys from bayou host the Super Bowl champion Kansas City Chiefs followed by a date with the invading Minnesota Vikings.

Ultimately, the road to division supremacy will be rougher than last year but the Saints will march to the top of the standings and into the NFC championship game. Once they defeat the 49ers, Bucs, Vikings, or Packers in that title tilt, their Super Bowl opponent will most likely be either the Ravens or the Chiefs. And although they will likely be underdogs against both, anything can happen in the NFL’s biggest game on its grandest stage!