Are you also checking this after seeing the various post over the social media world about sacred games season two that has hit the top entertainment news, then you are at the right place, we are going to update you on a lot of the things that are happening? Netflix’s Instagram page has already created a lot of hints for the users about the upcoming season two, right from Fathers Day’s post of Gaitonde or the Kuckoo image calling her Jannat. We all are super excited after all eight episodes of season one made their way. , let’s switch to the gossip. 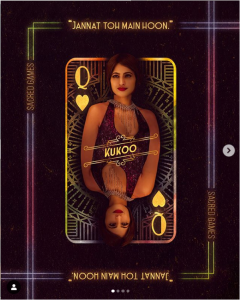 Web series have changed the world of entertainment, from a time when people used to wait for a movie to release or a tv show which had no concussion, to the time when twist action and thriller have taken the next level. Sacred games have been a favorite show on Netflix, and this season one took people to craze with its storyline. From the tragedy to the controversy this show had all.  The first teaser of Sacred Games was released on May 6 followed by stills of new characters played by Kalki Koechlin, Ranvir Shorey, and Pankaj Tripathi. This has already created a lot of images in the hands of people.

The makers have given a hint by sending the statement “25 din main school shuru hone wala hain.” this has already shown the level this season two is gonna take over. The wait is going to end now be a little extended because as before planning the web show is not going to get released on June 28 and is postponed to August because of the other shows hitting on Netflix. Ganesh Gaitonde is going to be shown in this season as a refuge, and the story is going to take a big twist.  As mentioned above, this show has some new faces being added. sacred games is a favorite web show. Being the first home production of Netflix India, Saif Ali Khan is shown very composed where, on the other hand, Nawazuddin Siddiqui holds the role of the crime god. He is seen with his fearless attitude and fire. Although this is not the first time where Nawazuddin Siddiqui is seen doing the violent role with every new look, he has taken the audience on another level.

The first season of the series based on Vikram Chandra’s best-selling novel was co-directed by Anurag Kashyap and Vikramaditya Motwane and opened to rave reviews worldwide.  The reports have also come where the cast of sacred games stated that the sacred game two is going to be the baap of season 1 and is going to break all the records. This is already making people excited, and the wit is now getting impatient. Let’s see when the finalized date of season 2 hits and when we can get back on the couch with our popcorn on and got all in this thriller web series.