The world of mathematics has many types of equations that scientists, economists, statisticians, and others use to explain, predict, and analyze the universe around them. Several variables are connected in these equations so that one can influence or forecast the output of another. Linear equations are common in elementary mathematics, but non-linear equations dominate in higher mathematics and science.

To identify them, you must learn to distinguish between linear and nonlinear equations.

What is an equation?

An equation is a statement of equality between two algebraic expressions containing constants and variables. The left-hand side (LHS) and right-hand side (RHS) of the equation are the two sides of the equality sign.

To solve an equation, we do a set of mathematical operations on both sides of the equation, such that the unknown variable is on one side and its value is on the other.

What is Linear Equation?

The general representation of the linear equation is y = mx + c, where x and y are variables, m is the slope, and c is the constant. Linear Equations have a maximum of one degree.

Linear Equation with one variable

What is a non-linear Equation?

The word “Non-Line” in Non-Linear means it is not a straight line but a curved line.

The general representation of the Non-Linear Equation is ax2 + by2 = c where x and y are variables and c is constant. A non-linear equation has a maximum degree of 2 or more than 2.

A few examples of Non-Linear Equations are

Difference between Linear and non-Linear Equations

The main difference between linear and non-linear equations is explained here so that students can grasp it more naturally. It is presented in tabular format with examples to make it easier for students to understand.

HOW TO IDENTIFY LINEAR AND NON-LINEAR EQUATIONS

There are many methods to differentiate between the two:

Let me explain it to you with a few examples. You will understand it better.

The variable x must be either zero or one degree, and variable y must be one degree to be a linear equation.

Both x and y are first degrees.

Both x and y are first degrees

Here all variables are first degree

Here x is degree zero, and y is the first degree 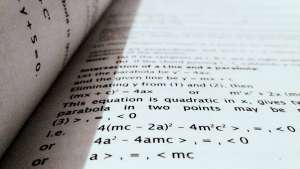 If variable x is first degree, but variable y has zero degrees, it will be a linear relation but not a function of x.

Graphs such as this are vertical lines and not a function of x.

If variable y is first degree, but variable x has a degree other than zero or one, it will be a non-linear function.

x is not the first degree.

x is to the power ½. Here the graph is half a sideways parabola(curve).

x is the exponent here instead of the base. So the graph is exponential and not linear.

If variable y is not the first degree, the relation will not be a function of x

Neither x nor y is first degree. The graph will be a   circle with a radius of 2.

Y is not the first degree. This is a sideway parabola(curve).

You should now be able to identify linear and non-linear equations.

As soon as you look at the graph, you should identify whether it is linear or non-linear. The simplest way to remember and identify is to keep in mind that a straight line indicates linear, and anything other than a straight line will be non-linear. Simplifying math in this way will help you learn it well.