Apophis (also known as App) is seen as the giant snake or serpent figured god and held titles such as serpent of Nile & evil dragon. He is an immortal Egyptian god of chaos and destruction. He also represented darkness who lived in eternal darkness, and therefore he is Viewed as the eternal enemy of the Egyptian sun god ‘Ra. Ra, the eternal enemy, is the god of light and Ma’at (order/truth). It is widely believed that Apophis, The God of Chaos is a negative force and couldn’t be entirely vanished, as every the night the sun traveled through the underworld (across the sky), and his negative vibes would fill the air while he attacks.

The ancient Egyptians were evident to be highly superstitious and feared that even mentioning the name of such an evil entity would bring unwanted attention to them.they also believed the same even with seeing the image of God of Chaos; They feared that even a copy of the evil god could make the evil spirit more powerful.

The depictions and images of pep from old Egyptian times depicted the god of chaos as a giant snake when various forms of Egyptian art forms such as tomb paintings, hieroglyphics, and stone carvings. 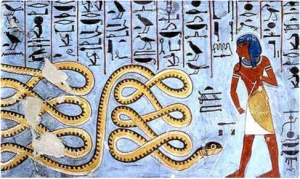 As per the legends, it goes that his body is 50 feet(approximately 15 meters) long and his head was made of flint, which is a hard and sharp stone.

The following picture of Apep features the evil god fighting against Atum (Atum-Ra), the sun creator god of the Ennead in Heliopolis.

Apophis has always been one of the few Egyptian gods ever to be shown with a monstrous form.

As per the family tree, Apophis is the child of Neith, who was the goddess of the hunt as well as of the War. Apophis was a brother to several important gods which are mentioned as follows- Ra, Hathor, Sobek, Thoth, and Serqet.

One of the most popular myths for Creation of the God of Chaos is that the god Atum(He-She god of Ancient Egypt with capabilities of both sexes) stood upon the famous primordial mound, surrounded by swirling waters of chaos began the job of Creation.

The god Heka, who is the representation of magic in Egypt culture was with him that time, and it was because of magic that Ra(order and sunrise) Appeared While also Apophis appeared making his earliest appearance. There is even a variation of this myth which had the goddess Neith look as well from Primal Waters.

Apophis wasn’t mentioned during the early era of Egyptian history. Egypt had five pharaohs passed before the god of chaos was even said, although there have been several cases of venomous snakes mentioned throughout Egyptian history which could lead an inspiration of god of chaos being made with the image of snakes in their mind.

Egyptians made their mythology based on what they knew from the environment they found themselves with, which influenced their art profoundly as well which is evident because Ra is represented as a cat, and cat and snakes are enemies. There has been no mention of Apophis the god of chaos being worshipped., instead there is also an ancient book whose sole motive is anti worship which features an extensive range of rituals meant to keep the god of chaos at bay because fear among people from the god of chaos was very high.

Apophis was also blamed for many negative aspects of life. For example; earthquakes are said to be caused by his body writhing in the underworld.