Ticks are parasites that can cause a number of serious health conditions in your dog as they are carriers of several different types of infection-causing microorganisms. With the tick season just beginning in several parts of the country, it is time for pet parents to safeguard their pets against tick and flea infestation, which can sometimes turn fatal if left unattended. 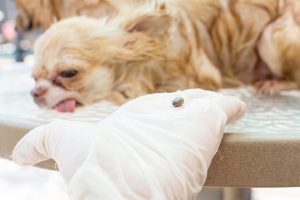 The longer ticks stay on your dog, the greater the impact of the problem, so precautionary measures should be taken early on. Do a daily manual inspection of your dog’s coat to check for a flea or tick problem—only then can you proactively treat the infestation before it gets out of hand. This is particularly important during the warm months of the year. Once you suspect or know that you have a tick problem, getting the right treatment for your dog is the next important step.

Tick preventives are chemical formulations that eradicate adult ticks as well as tick eggs, larvae and pupae. These are available as spot-on products, sprays and shampoos, and are effective in not only controlling an existing parasite problem but also in protecting your pet against future infestations.

Experts recommend using pest-control products at least once a month during the tick season to be sure that your dog is well-protected from deadly tick-induced diseases, four of which are listed below.

Ticks thrive in the wild and get the infectious microorganisms from wild animals. This particular tick-borne disease is caused by a bacterium called Anaplasma platys, which ticks get from wild deer and wild dogs.

Symptoms of Anaplasmosis are hard to ignore and range from very high fever, digestion issues coupled with diarrhea and vomiting and loss of appetite to more serious symptoms such as seizures and neurological problems. Get a blood test done as soon as you suspect your dog may have contracted an infection. While most dogs clear Anaplasmosis on their own, treatment for serious infection usually involves a course of antibiotics.

Lyme disease, or Borreliosis, is common but difficult to identify.

It is caused by a bacterium called B. burgdorferi. The problem with Lyme disease is that many times there are no physical symptoms, which makes it harder to detect the infection. As stated before, if your dog has a tick infestation, take them to a vet as soon as possible to be sure the ticks haven’t caused a deeper health problem. Some vets recommend testing for Lyme disease at least twice a year, particularly if you live in a region where ticks thrive throughout the year.

Some pets, however, do display symptoms, which may take no less than two months to show up. Common symptoms of Lyme disease include high fever, fatigue and listlessness, poor appetite and, more severely, swollen joints.

Fortunately, Lyme mostly clears out on its own and only in rare, serious cases would your vet prescribe antibiotics.

This infectious disease is caused by the Rickettsia rickettsii bacteria, carried by the Rocky Mountain wood tick and the American dog tick, found mostly on eastern plains. Symptoms of RMSF are similar to other infections discussed previously, such as loss of appetite, fever and diarrhea. However, serious infections can lead to fatal symptoms such as kidney damage, heart problems, liver damage and neurological problems.

You can protect your dog against these infectious diseases by eliminating the carriers of the bacteria from your dog’s body as well as your home and exteriors. This requires timely pest-control treatment using quality tick-control products.

Contrary to other diseases discussed above, this one is caused when a dog ingests a tick that is carrying either the H. canis or H. americanum organism. The former generally presents no symptoms, making it harder to detect, while the latter is a more serious infection with symptoms such as high fever, anemia, muscular impairment, body pain, eye infection and even depression.

If you want to shield your dog from these deadly parasites, any symptoms suggesting that this could be the problem of an underlying infection must be taken seriously.

Americanum causes American Canine Hepatozoonosis (ACH), which is treated with medications for about two weeks. During this time, three different kinds of antibiotics are administered. To avoid relapse, your dog may be prescribed daily medication for the next two years. Old World Hepatozoonosis, caused by H. canis, is treated with multiple doses of medication until the time the infection can no longer be detected in your pet’s blood.