Market trends change by the day. Every day some fancy new gadget is introduced and it becomes the talk of the town. The automobile market has seen a recent trend of LED headlights in cars. You may have heard good things about LED lighting in general since they are more efficient than ordinary incandescent light bulbs. They consume far less energy, give off less heat and are more resilient to the elements. But in the case of vehicles, there use has been somewhat of a nuisance for car owners who do not use these LED lights. Discussed below are the reasons why these should be banned: 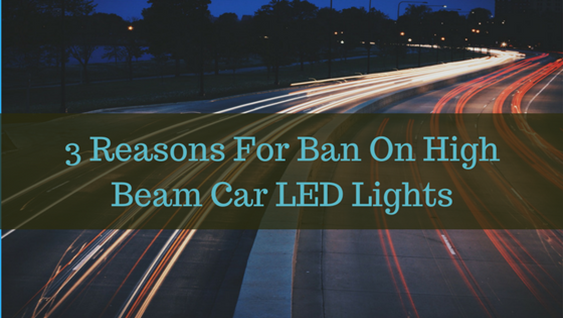 LED headlights can usually be recognized from their distinctive pale to bluish white color in contrast to the normal yellowish white light emitted by incandescent headlights. People get these LED (or HID) lights installed in place of the high beam halogen bulbs. This gives them the ability to use their ordinary halogen headlight for normal use and the HID light for when they need extra light on the road. But what happens is that they never use the old low beam once they try out the LED high beams. The intense brightness added with the elevated angle blinds the oncoming driver. This is a serious issue that needs to be addressed. Oncoming vehicles’ drivers are completely blinded as the light shines directly into their eyes rather than on the road (which was the intended use).

LED headlights are famous for their light intensity. These LED lights are capable of producing huge amounts of light using the same amount of electricity as an ordinary halogen bulb. This is why they are easily swapped in place with the halogen lights with no modifications required. The intense brightness of these lights causes, what may be termed as, cancellation of light. What this means is that the light emerging from the oncoming vehicle is canceled out by the intense light coming from the LED headlight. This causes the driver in the oncoming vehicle to become unaware of what is on the road. He is practically unable to see anything. This is a huge disadvantage for other drivers. It’s like turning on a torch towards the ground on a bright sunny day and expecting to see a spot. You can’t because the sun’s light overpowers the torch’s light. Same is the case with LED lights and halogen lights.

Car manufacturers follow a strict set of rules when it comes to the characteristics of their car’s headlights. The intensity, shape of throw, angle, color, hue and many other factors are all regulated to ensure that the best possible visibility can be achieved under all conditions. They also keep in mind the oncoming driver and his vision, so the shape of throw is altered by lenses in a way that doesn’t blind him. This way everyone is taken care of and the system works flawlessly. When people install third-party LED headlights, they essentially destroy the whole system. In order to tackle this situation, either every car should be equipped with these LED lights or they should be completely banned. Since car manufacturers have not equipped their cars with these still, there is a solid reason for that; they are not required. The standard lights in cars are more than enough to see on the road. So a standardized set of rules should be implied so that a complete ban on these lights can be applicable. And anyone who uses these may be punished or fined for it. The lack of such rulings in the present is causing major road accidents, which could’ve been avoided if the said laws were implied all around.

New products emerge every day in the market, that is how the market grows. What needs to be ensured is that those products are legal, used fairly and are according to rules and regulation set by the authorities. LED headlights should not be used in any vehicle at all. They should be banned from the markets so that accidents caused by their use can be avoided in the future.