After a long creative break, the Machete band will return to the big stage again. This was stated by the frontman of the group Yaroslav Malyi.

Band members of the Machete spent their creative break travelling to different countries, looking for inspiration. Guys visited India, Israel, Singapore, and Bali, where they communicated with the local population, engaged in spiritual practices, and learned new customs. At the same time, the band was working on creating a new album, which will soon be presented to the audience.

Yaroslav admitted that taking a break was necessary for all members of the group. For four years, the band was learning to appreciate life, and searching for it’s meaning. They meditated a lot, communicated with ancient peoples, and did soul searching. Time was not wasted, and such an atmosphere was what they needed to create new tracks.

The frontman of the band noted that the decision to take a break was made mutually. The guys believe that to create something new and worthy; it is necessary to distance from the fans and their attention. Nevertheless, on an extended vacation, the band managed to communicate with many foreign musicians and learn the secrets of their creative work. In such an environment, lyrics were written very quickly and naturally, says Yaroslav Malyi. 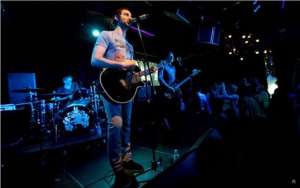 The producer of the Machete band is Mikhail Peleg. In an interview, he continually talks about how much he is proud of the collaboration. The result of which will soon be presented to the multimillion audience. He notes that the work of the band rightfully deserves attention because each participant sincerely tries to transfer his energy to the listener.

Founder of the group Yaroslav Malyi and their producer Mikhail Peleg announce that the new album will be different from their previous songs. It is done in a unique mixed style. Yaroslav conveys sincerity in each word of the lyrics and makes them simple and understandable for everyone. The frontman is sure that the songs will find their listeners and will undoubtedly become hits.

The creator of the group speaks with joy about the new creative path. During his absence, he rethought many things, singled out the central values. It has been reported that the main track of the new album will be the song “Sky is my home.” In it, Yaroslav talks to all people who are ready to listen to him. There will be nothing intricate in the song, only the voice of the frontmen’s soul. According to the artist, this particular composition will be the key to understanding the entire album.

In everyday life, people lose themselves as a person, and they forget about the importance of feelings. The singer says that the song “Sky is My Home” asks many questions, and he is sure that everyone will find the right answer for themselves.

The official announcement of the Machete band return was not the only news for the fans. They are coming back with a completely new repertoire, many concerts, and news clips. Also, Yaroslav does not hide the fact that the band members have also been changed. Famous musicians Mikhail Lisov (guitar) and Alexander Zinger (drummer) joined the band.

The Machete band was created in 2010. It was just an Internet project of Yaroslav Malyi, with which the frontman wanted to go beyond the scope of large-scale concert venues. However, the very first compositions “Tenderness,” “Dad,” and “Do not part with your loved ones” became popular and changed the frontman’s plans at the root. A few days after the presentation, the songs won the hearts of the audience and became famous all over the world. The video for the song “Tenderness” has gained more than 33 million views on YouTube.

A brand’s website is crucial to its success. It serves as a brand’s portfolio …