COPD is a chronic progressive lung disease. It causes chronic inflammation, airway narrowing, exertion-induced coughing with mucus, and shortness of breath. Smokers and passive smokers are more in danger. You may learn about the causes of COPD here. In the world, 80-90% of COPD cases are caused by smoking.

Tobacco smoking increases the risk of developing COPD by a factor of 13 and is the main risk factor for the development of the so-called smoker’s lung (COPD). Up to 50% of older smokers have COPD. The risk of developing COPD is determined by the total number of cigarettes smoked for life (based on the so-called pack-years). A pack-year means the consumption of cigarette packages of a smoker over the period of one year. This information can be converted accordingly to the respective personal consumption.

In India, about 30.2% of adults are prone to second-hand smoke exposure in indoor workplaces and 36.6% of youth, between 13-15 years of age, are prone to passive smoking in public places (1). According to estimates by the European Respiratory Society, 4,000 non-smokers in Germany die every year as a result of secondhand smoke, of which more than 900 patients alone from COPD caused by secondhand smoke (2). Children who have to passively “smoke” in their environment suffer more frequently from respiratory infections and have an increased risk of developing bronchial asthma or other respiratory diseases. The nationwide smoking bans are therefore necessary (3). 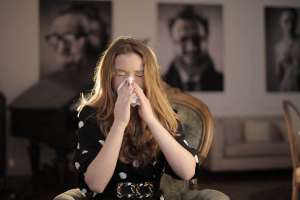 The cause of COPD is not always smoking. The genes also play a role and can cause an inherited hereditary disease, the so-called alpha-1-antitrypsin deficiency.

Air pollution is another probable cause of COPD. Nitrogen gases and Sulphur dioxide (SO2) are particularly important here. Living on busy streets with high amounts of particulate matter has been found to increase the risk of COPD. Childhood infections can raise the risk of getting COPD.

Chronic pulmonary illness can also be triggered by hazardous specks of dust, fumes, smoke, or gases to which some workers are exposed. The chance of getting COPD later in life is raised by a ratio of 2.4 among non-smokers. The chance of disease is even 18 times greater among smokers. A relatively uncommon cause of COPD is congenital immunodeficiency (antibody deficiency syndrome).

COPD: The Factors That Contribute To Its Development

COPD often begins with obstructive bronchitis: pollutants breathed irritate the tiny airways, the bronchioles. As a protective measure, the lungs produced increased amounts of mucus. Typically, mucus is transported by the cilia to be expectorated through the throat. These are the tiniest, most mobile hairs (cilia) that cover the surface of the unique cells that line the majority of airways (ciliated epithelium).

However, contaminants like nicotine degrade the cilia, eventually impairing the ciliated epithelium’s capacity to cleanse and transport. It is eventually replaced by a more robust squamous epithelium, resulting in the thickening of the lung tissue. When you exhale, the alveolar wall becomes thin and fragile. If the individual attempting to exhale uses all of his might, the alveoli collapse. Eventually, this procedure results in permanent constriction of the airways. The result is shortness of breath and decreased performance.