Mayanti Langer is a renowned sports journalist from India who is also Stuart Binny wife, the popular Rajasthan Royals cricketer since their marriage in 2012. Being married to an international cricketer, currently Mayanti Langer is an accomplished cricket and football journalist with the Star Sports network. 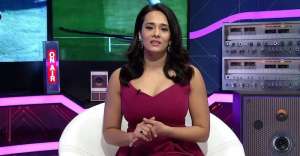 Mayanti Langer was born on 8th February, 1985 in New Delhi, India to Lt. General Sanjiv Langer and Preminda Langer. She attended school in New Delhi and received her B.A. (Hons) from the Hindu College, of the University of Delhi. Mayanti later went on to attend college in the USA. It was while studying in the US that Mayanti found her passion for football. While in college, Mayanti became a part of her college football team and went on to make a mark for her when she was invited as a guest anchor for the broadcast of the FIFA beach football tournament.

After the immense popularity of the beach football broadcast, ZEE Sports invited Mayanti to become a host and associate producer for Football Café. Mayanti found increasing fame on ZEE Sports and went on to host numerous football tournament broadcasts for the sports TV network, providing commentary and interviewing players before matches, during half-time and post-match.

Stuart Binny wife Mayanti was also chosen to be the anchor for the Nehru Cup football tournament which was held at the Ambedkar Stadium in New Delhi. Later on, Mayanti became popular for being the anchor for the India Cricket League broadcast on the Zee Sports network.

Mayanti Langer is a truly phenomenal and talented TV host and anchor for sports broadcasts and has proven her versatility by becoming the host for the TV broadcast of the 2010 FIFA World Cup football tournament for the ESPN sports network, where she gave expert pre-match, half time and post-match analysis of the games. Mayanti was the head of a panel of sports experts, which included legendary football commentators and experts, such as John Dykes.