Stargirl is the newest show to be picked up as part of the CW network’s lineup of original dramas based on the DC superhero universe, and it’s a little different from what fans are used to seeing in a show like this. Like its predecessor, Black Lightning, it deals with superhero roles advancing generationally but takes the concept in a totally new direction.

Where Black Lightning asked fans to think about superpowers as hereditary and the responsibility that comes with them as a legacy, Stargirl features instead of a power set that can be passed down and focuses upon the weight of that passing when a new hero takes up the mantle.

The show’s first season debuted on DC Universe in May 2020, and it quickly gained popularity amid a warm critical reception. As a result, CW began airing shows after their DC Universe debut, leading to the speedy renewal of the show for a second season. Season 2 of Stargirl will debut as a CW network original, elevating it to the same level of audience accessibility as other major titles like Batwoman and Legends of Tomorrow. Its diverse cast features names you might recognize from other network television and film roles, as well as a couple of newcomers. 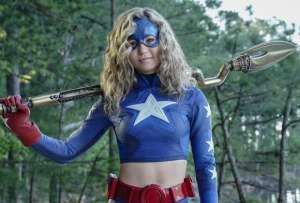 Stargirl’s title character, Courtney Whitmore, is played by BrecBassinger whom you might remember from Nickelodeon’s Bella and the Bulldogs and the Hulu show All Night. She plays the stepdaughter of Starman’s former assistant who inherits his staff and powers. The show explores her father’s relationship with the hero and follows her as she learns about the superpowers he inherited. Yvette Montreal plays Yolanda Montez alongside her. Other relative newcomers include Anjelika Washington as Doctor Mid-Nite and Cameron Gellman as Hourman. Luke Wilson also joins the cast as Courtney’s father, adding an easily recognizable name to the cast as well as a strong scene partner to the young lead.

An Ensemble in the Making

The story of Stargirl is more than just the story of one new hero. During his time, Starman headed the Justice Society of America (JSA), a league of superheroes that was as vital to the protection of America’s communities as the Justice League, albeit with a different scope to their activities.

The JSA was touched on in Legends of Tomorrow, so DC television fans have heard of it. The Stargirl series provides an opportunity to open up more stories and to expand on them through a new JSA. It’s clear that showrunner Geoff Johns has this in mind from his early inclusion of names from classic JSA formulations, and his background working on the JSA books will be sure to impact the direction those stories take.

The longer Stargirl is on the air, the more we’re likely to learn about supporting cast members, their backstories, and their abilities. Based on past CW shows from the DC comic book universe, it’s also extremely likely that some of the established characters who don’t develop powers by the end of the first season could become heroes by the end of the second. That has happened on practically every show in the lineup so far, and the results have always worked well for the series.

The question to ask as you wait for the next volume in this story is who will those new characters be and how will they fit into Stargirl’s story? What do they unlock on her story of discovery? Only time will tell, but at least the CW has made it clear that we get to find out.