Karley Sciortino is a popular American writer, producer and TV host. She was born on 16th October 1985 in Highland, New York state and has a brother named Robert Sciortino. Later on, she moved to London where she popularly lived in a squatting commune. Sciortino moved back to the US in 2010 and lived in New York City before adding Los Angeles as one of her bases too.

Karley is the founder of the popular sex-ed blog “Slutever”, which focuses on sex and sexuality. She is also the executive producer and host of “Viceland” documentary series which airs on the Vice Channel. In addition to this, Karley also writes a bi-monthly column for Vogue magazine on online sex relationships as well as a column called “Breathless” based on relationship advice. Karley is also renowned as the writer of Sugar Babies, a monthly column on Vice, which highlights the dating life of sex workers across the US. 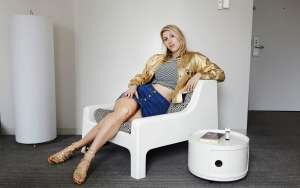 Karley Sciortino’s first job was as an intern at Dazed, the British style magazine where she wrote articles on sex and culture.

In 2007, Karley started her popular blog “Slutever” while living in London. In the beginning, the blog was focused on her and her roommate’s sexual exploits and their life staying in the unique squatting commune. However, the blog evolved into “a chronicle of sexual experimentation” according to the New York Times.

In 2012, Karley, along with producer Adri Murguia launched a web series titles “Slutever” for the Vice broadcasting company which ran it for 3 seasons. The series was a journalistic study to explore the taboo aspects of modern sexuality, which Karley hosted successfully.

In 2017, Karley again collaborated with Murguia and co-created “Viceland” TV show, titled “Slutever” which was a fantastic spin-off of their web-series. In 2019, Viceland aired the second season of the show following immense response to the pilot series. In the same year, Karley starred in the 3rd episode of season 2 of Joe Swanberg’s Netflix show “Easy”, titled “Side Hustle”.

In 2019, Karley collaborated with co-writer Gregg Araki and wrote the screenplay, apart from being the show’s consulting producer, for the first season of “Now Apocalypse”, which was a surreal comedy TV show that aired on Starz. The series lasted a single season before being taken off the air.