Everyone loves to have a fresh, cheerful face looking back at them from the mirror in the morning. However, aging and our fast-paced lifestyle tend to show its effect early on the face. Most people notice the puffy bags and dark circles around their eyes after a few stressful months or with advancing age. Thanks to advances in medicine, today you can get effective organic creams for dark circle under eyes.

Before we begin to learn the immense benefits of organic creams in fighting signs of aging, let’s take a closer look at what causes dark circles under the eyes and the different treatments you use to get rid of them.

What are dark circles under the eyes?

However, according to research, very few men and women suffer from what is known as “true dark circles”. Most people tend to develop dark rings under their lower eyelids due to shadows created by puffy eyes or from hollows created due to the aging process.

Aging is inevitable and the hollows created under the eyes need aesthetic surgery to be filled. However, there are homemade treatments and organic creams that can help to get rid of the shadow from puffy eyes. Although there is no herbal age-reversal treatment, you can definitely try one of our recommended organic creams for dark circles under the eyes and rejuvenate your appearance and confidence.

What causes dark circles under the eyes?

There are several factors that contribute to creating dark circles under the eyes. Some of the more common cause includes:

Advancing age is the most common reason that men and women develop puffy eyes and dark circles under them. With age, your skin tends to lose its elasticity due to the loss of fat and collagen. This makes the skin thinner, especially on the face. The flimsy skin under the eyes makes your underlying blood vessels more noticeable, thus causing the area of skin under your eyelids to seem darker.

Oversleeping and extreme fatigue, or even staying up a few hours over your usual bedtime, can result in developing dark circles under your eyes. Lack of sleep causes your skin to become pale and dull, thus highlighting the underlying blood vessels under the eyelids. Sleep deprivation also causes fluid to build under your eyes, making them puffy. So, the dark shadow under your eyes might also be caused by puffy eyes.

Stress on the eyes, such as from staring at the computer or TV screen for a long time, can also cause the blood vessels in the eyes to swell. This casts a shadow under the eyes and makes the under-eye appear darker.

How to get rid of puffy eyes or bags under eyes? 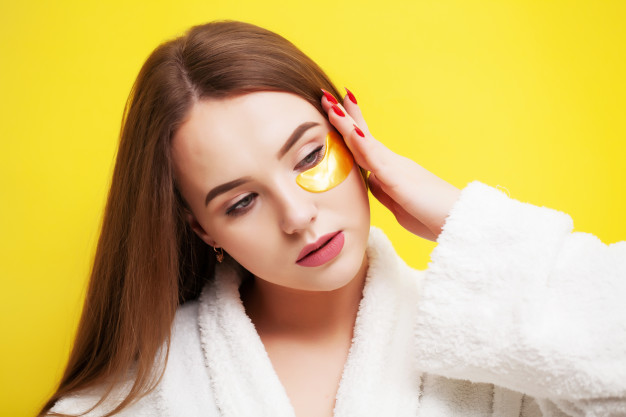 Here is a simple step-wise guide to use a cold compress and get rid of dark circles under the eyes:

You don’t have to go on a special diet, but only need to cut down on your salt intake and avoid drinking too much water before bedtime.

Everyone knows smoking is extremely harmful to health, and it can also aggravate the bags under your eyes. So there’s another reason to quit smoking finally.

Pure, organic creams for dark circles under the eyes are extremely effective and get rid of the shadows under your eyes with quick efficiency.

Make sure to choose only the best organic creams for dark circles under eyes from leading brands so that you can regain and rejuvenate your looks easily.