In the modern world, having a car is already considered a need. There are a lot of places that you need to go to even in the city or town that you are living in. Using public transportation can be very uncomfortable, and taxis fares are becoming more expensive. Cars can actually save you so much time because you don’t have to wait for anyone. All you need to make sure is it turns on, gas is filled up and everything is working perfectly fine. Also, you need to check on the lights, especially if you are going to drive at night. This can be your savior, especially in clutch moments and situations. Learn more about why you need a good pair of headlights here even during the daytime.

There are basically three types that you can obtain. Each of them has

their own strengths but also weaknesses as well. If you are really looking for the best for your car, you need to know first whether the type that you have chosen is compatible with your model. There are some cars that can only operate and use one type of light, so make sure that you know that before you make any kind of purchase. Here are the three kinds, starting with the most common and oldest amongst these three.

Getting To Know Halogen

These can be considered as the classic ones, as they have been on the market for a very long time. Older models still have this one, and some manufacturers are still using it up until the newer models became quite different. This is most probably due to the demand of the consumers and the changing times. Halogen is the light that is already installed once you have bought your car. It is rather affordable to buy and some brands can still produce good brightness even at night. Learn more about halogen here.

However, one of the main problems of halogen is its energy efficiency. Most only last a year or two at most, so you need to buy another set all over again. This is because it produces so much heat due to its older design. Combined with its usually subpar brightness, most car owners started looking for alternatives. The orange rays might be a classic, but times are already changing. There needs to be an update regarding car illumination. This is where the next type enters the scene and when it comes to brightness, it is unstoppable. 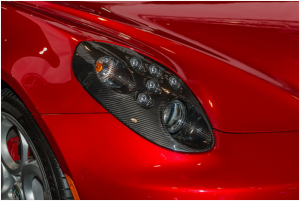 High-intensity discharge lights are also known as xenon lights, as they have traces of this element in their system. It can be considered as the better version of halogen as it produces brighter rays with better energy efficiency. HID bulbs are also not massive producers of heat, so they are not susceptible to damage as well. However, their brightness is so blinding that people were cautioned to using them. However, some manufacturers have toned down their HID’s brightness and it would usually have blue colored lights. This brings us to our best recommendation: LED.

Saving The Best For Last: LED

The acronym means light-emitting diode, which refers to the material that gives the rather bright light and the mechanism behind it. These were first introduced as an alternative to the incandescent one for homes and buildings. However, that plan didn’t turn to be all that plausible. When they realized that they are so small, it was also applied to a lot of electronics.

All screens of every single computer and phone around the world are made with millions of LED bulbs. You can’t see them, of course, but they’re there – thousands or maybe even millions of them. They’re also used for billboards and you can’t even begin to imagine how expensive an LED screen is. So if you ever rent one for an event or something, handle it with care. Anyway, with this kind of versatility, it wasn’t long until it was introduced in car manufacturing. You can get these now at most car parts sellers, but they can be rather pricey. If you want to go straight to checking them out, there are some available online like on this link for example https://ledlightstreet.com/collections/led-headlight-kit.

One disadvantage of LED, however, is that it produces rather sharp light which can be dangerous for other drivers. However, its brightness can be easily controlled because it depends on the number of small bulbs inside. However, if it is not installed correctly, it can be as blinding as the uncontrolled HID. You also need to check the dispersion of light after you have installed it since it can affect the vision of other people.