The current title-holders of the Pro-Kabaddi League (PKL), are geared up to protect their status as the no. 1 team in the upcoming tournament this year too. Bengaluru Bulls has improved their performance remarkably after finishing in the fringes during the first two PKL tournaments. However, the team rose to glory when they defeated the Gujarat Fortune Giants last year.

Head coach Randhir Singh has immense skills to repeat last year’s stunning performance for the Bengaluru team. The current Bengaluru Bulls team has been carefully handpicked by team owners Kosmic Global Media and is a mix of best-of-the-best.

The top performers in the current Bengaluru squad for the Pro-Kabaddi League 2019 are: 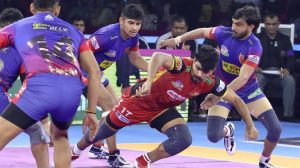 Check out some quick facts and stats of Bengaluru Bulls here:

Here are some highlightifang stats of the Bengaluru Bulls attack performance in the past PKL tournaments:

Here are major stats about the performance of Bengaluru Bulls defence line in the past PKL tournaments that you should know:

Note: These are the stats as of September 2019.