Apple, the global tech giant, recently announced the launch of its latest smartphone, the Apple iPhone XI. Ever since the launch of its iPhone range over a decade ago, Apple’s products are sought by gadget-freaks and professionals alike.

Apple announced its intention to introduce the incredible iPhone 11 in India on September 10th, 2019 at an event in San Francisco last week. The company aims to target its million+ Apple-lovers in the country and allow them to experience the next generation of iOS mobile technology.

Apple is set to launch the iPhone 11 along with its two variants – iPhone 11 Pro and iPhone 11 Max – the flagship handsets of the company today.

Let’s see what the amazing additions to features that the iPhone 11 specifications have to offer:

The iPhone 11 measures 150.9 mm x 75.7 mm x 8.3 mm, making it one of the slimmer smartphones in the market. The lightweight battery has also helped lower the overall weight and the iPhone weighs in at only 194 grams.

Apple has launched its new iPhone 11 in 6 vivid colors. You can buy the iPhone XI in either the signature Product Red color, or choose from Black, Yellow, Purple, Green or White. The rear of the iPhone 11 is made of glass with a Lightning Connector in the bottom edge.

Apple’s iPhone 11 comes with an impressive 6.1-inch Liquid Retina OLED display. It has a notch-display that still retains an 80.2% screen-ratio. The display is vivid with 324 PPI and a screen resolution of 828 x 1792 pixels.

The iPhone XI comes with a comfortable-to-use capacitive touch-screen with multi-touch ability. 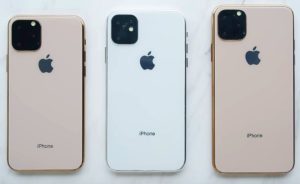 The iPhone 11 has dual 12MP rear-cameras, where the first camera is equipped with a 26mm lens while the second camera comes with an ultra-wide lens that gives a 120-degree view.

The front camera in iPhone 11 is also a 12MP but with TrueDepth technology. This allows users to capture wider images by simply rotating the phone.

The dual-lens camera of iPhone 11 allows you to capture impressive 4000 x 3000 pixels images.

The iPhone 11 is being named by Apple as having the “highest quality video recording in a smartphone” as its video modes include 4K videos, along with time-lapse and slo-mo video recording. The 4K video recording is possible with the rear cameras and the front camera. The video quality has been further improved with a better image stabilizing program too.

The iPhone 11 has an impressive camera with auto-flash (Quad-LED True Tone Flash) and face-detection as well as having a phase-detection autofocus feature. You can choose between HDR (High Dynamic Range) or Continuous Shooting mode to capture stunning 4K videos.

The Apple iPhone 11 has the latest iOS v13.0, despite being one of the cheaper models by the company.

iPhone 11 is compatible with 4G networks (including Indian) as well as supporting 3G and 2G carriers as well.

The iPhone 11 comes with a useful dual-SIM feature. It can hold 2 SIM cards (GSM + GSM) with SIM1 slot supporting a Nano-SI+M while the SIM2 slot supports an eSIM.

Unfortunately, the+ iPhone 11 does not come with a fingerprint sensor to unlock the phone.

The iPhone 11 has been fitted with a face-detection unlocking feature for added security.

The Apple iPhone XI comes equipped with the advanced Apple A12 Bionic chipset for faster performance.

The Apple iPhone has the incredibly powerful Hexa Core processor integrated into it, which consists of a Dual-core 2.49 GHz Cortex processor and a Quad-core 1.52 GHz Tempest processor.

The iPhone 11 is set to have a 64 GB built-in storage memory. It is non-expandable, unfortunately.

The iPhone 11 comes with an apt 64-bit architecture.

iPhone 11 is expected to work brilliantly with the 4GB RAM power.

The iPhone XI comes with a 3110 mAh Lithium-Ion battery which has Fast Charging and Wireless Charging functions too.

The iPhone 11 comes with an IP68 waterproof rating. This means that you can easily use the iPhone Xi under 2 meters of the water safely.

Unfortunately, Apple has decided to fore-go with wired headphones and the iPhone 11 does not contain the conventional 3.5 mm headphone jack.

The Apple iPhone XI model is being branded as the ‘cheap’ iPhone and will be available for pre-booking from September 13th. Apple has set the iPhone 11 launch date in India on September 10th.

There have been many speculations regarding the iPhone 11 price. The company has already announced the price range for the latest smartphone for American and European customers so we now know the approximate iPhone 11 price in India for 64GB variant.

According to experts, the Apple iPhone 11 max price in India is set to be around Rs. 64,900 as the phone costs somewhere around USD 9,055 in the US.