The town of Swindon started out as a small Saxon village and rose from those humble beginnings to where it is today.

The Wiltshire town has produced many famous people including Nick Hewer, a Countdown presenter, actor Billie Piper, and model Melinda Messenger, along with a magic roundabout, a former Premier League football team, and much more.

Swindon is a great place for property hunters as well, with a combination of modern and period homes, well-priced houses, and outstanding commuter links. So, if you’re thinking of moving to Swindon – here’s the lowdown.

Property prices in Swindon compared to the nearby hotspots of Reading, Newbury, and Bristol makes it a very attractive option for people buying houses.

When you add in its excellent location right off of the M4 and the mainline station that goes London you can easily see why so many people who work in London are moving to this town in Wiltshire.

As a buyer, no matter what you are searching for, Swindon offers a lot of variety. Swindon’s Old Town area is very popular and highly sought-after due to the traditional Edwardian and Victorian terraces that it offers.

Families and young professionals enthusiastically seek out these houses along with their cherished period features.

For larger homes, the area near Coate Water Park in the southeast of Swindon is popular for its new builds and 1930s detached houses.

In 2018, most of the houses that sold in Swindon were terraced houses. Rightmove reports that the average selling price was £202,763.

With detached houses selling for an average price of £360,283 and semi-detached properties selling for less than £250,000, there are many properties available for sale for first-time buyers up to the most experienced homeowners.

In the meantime, according to Zoopla, the average selling price for Swindon flats is £153,948.

Houses For Rent In Swindon

There are also plenty of choices for those wanting to rent in Swindon.

There are also many houses available for rent. The average rent for three-bedroom houses is under £1,000. 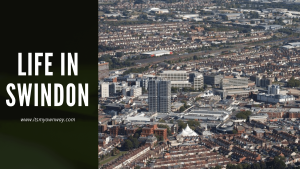 In addition to the M4 motorway located south of town, the railway station in Swindon provides regular services to London Paddington. It is about an hour-long trip.

Bristol Airport is less than 50 miles away, while it takes about 60 minutes by car to reach Heathrow Airport from the M4.

Via the M4, Cardiff is just over 70 miles away, with the Cotswolds just a short distance up the A419.

Although the town was dealt a big blow when the car manufacturer Honda closed its factory in Swindon in 2021, there are still many other large employers here.

First Great Western, WH Smith, Npower, and Nationwide are all companies that are based in Swindon. Last year Wasdell Group, RFS, Outsourced Recruitment, Excalibur Communications, Beard, and Appsbroker all made it on the London Stock Exchange list of the country’s most dynamic medium and small-sized enterprises.

The Designer Outlet shopping park in Swindon is very popular with fans of fashion who are searching for brand bargains.

Meanwhile, Swindon’s Brunel Shopping Centre has over 100 shops including House of Fraser and M & S.

The restaurants in Swindon range from classic British food to European, Asian, and Indian cuisine.

Curry fans can head over to the town center to Jewel in the Crown located on Victoria Road for great ambiance and spice.

in the meantime classic authentic Greek dishes such as Bekri Meze and Moussaka are served by Greek Olive located on Faringdon Road.

If your favorite cuisine is hearty, classic British food, then head over to Wanborough to New Calley Arms where you can enjoy such classics as honeycomb cheesecake, rump steak, and fish pie.

During the summer in Swindon, you can enjoy some adrenaline-pumping speedway action at Abbey Stadium in Blunsdon by watching Swindon Robins.

League Two’s Swindon Town played in 1992-93 in the Premier League and are still a very entertaining side that can be watched at Country Ground.

It is worth visiting the Steam Museum of the Great Western Railway. Swindon is well-known for being a railway town and all of its histories can be found here under a single roof.

Finally, any visit to Swindon must include stopping by the Magic Roundabout in town.

Actually, the roundabout is six roundabouts all rolled in one (with one main and five mini-roundabouts). In 2009 it was voted the fourth scariest junction in the UK. Its appearance can be terrifying for the average motorist.

However, it does work. And it actually very satisfying to watch drivers negotiating it.

Things to do with children

With gaming so popular in 2021, the Museum of Computing in Swindon is an excellent way to show your children that everything wasn’t always FIFA and Fortnite.

The museum showcases desktop machines and vintage handheld devices so you will be able to show your kids what you played with as a child.

The Oasis Leisure Centre is great for swimming and also has slides and a wave machine to keep the kids happy.

The high ropes course at the Jungle Parc is an outstanding option for enjoying fresh air and adventure during the warm weather,  or the kids can run free on Lydiard Park country park’s grounds.