Has your hair become thinner? Does it fall out more often than usual? While baldness is generally associated with men, it tends to affect a large percentage of the female population, especially after menopause.

Apart from aging, genetics, and hormonal changes, alopecia in women can be triggered by pregnancy, stress, smoking, and wearing tight hairstyles. Make sure to get more information on female baldness.

The following guide will introduce you to the causes and symptoms of thin hair and baldness in women.

What is female pattern baldness?

Moreover, this condition has another name, which is androgenetic alopecia. It’s usually hereditary and induced by hormonal changes in the body. Androgenetic alopecia usually develops the following menopause as women get older. Therefore, females are strongly advised to check their hair once approaching the menopause stage and consult a doctor upon noticing some signs of baldness.

Women are supposed to be familiar with the symptoms of female pattern baldness in order to avoid it altogether or treat it properly. While it’s normal for a person to lose between fifty and a hundred hairs on a daily basis, women suffering from androgenetic alopecia notice many whole strands in the shower drain or on their hairbrushes.

For instance, type I is the initial stage of androgenic alopecia, during which the thinning commences at the part line. Women who recognize the symptoms in this stage have the best chances to prevent severe baldness. Conversely, type II shows greater advancement of the condition as the part becomes wider. Type III, however, is the most serious form of androgenic alopecia, as the part area becomes entirely bald while the rest of the hair is thinning gradually. 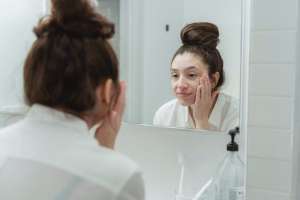 Androgenetic alopecia is genetic and triggered by changes in hormones. For example, let’s assume one of your parents suffers from this condition. Then, it’s highly likely for you to develop it as well. Certain endocrine conditions and hormonal changes might also be responsible for its development, especially if you recognize other accompanying symptoms, such as acne and period irregularities.

Every single hair growing on your head passes through three phases, anagen, catagen, and telogen. The anagen phase lasts between two and seven years, during which strands grow by coming out of the head follicles. In this stage, the hair is strong and has a lower chance of falling out. In contrast, catagen is a transitional stage, which lasts no longer than three weeks. It indicates the end of active growth.

The ultimate phase is called telogen, which lasts for a period of three months ending with hair loss. Each hair on your head passes through these phases controlled by androgen hormones. Nevertheless, once hormonal changes appear, the phases become disrupted, and the first signs of baldness develop. Due to aging, the anagen phase goes through certain changes, such as becoming shorter. It means the hair doesn’t spend enough time growing, thus reaching the telogen stage much faster.

In addition, as individuals get old, the anagen phase needs more time to start again after strand loss. Follicles sustain changes as well, such as shrinking and becoming narrower. Consequently, hairs become thinner and lead to baldness. These changes triggered by hormones usually occur after the age of forty.

What is traction alopecia?

Traction alopecia is another common cause of hair loss in females, which isn’t triggered by hormones or genetics but by pulling the hair. It’s frequent in women wearing ponytails, braids, and buns. The initial signs of this condition include tiny bumps in the scalp area, which resemble pimples. Traction alopecia is most noticeable along the hairline and the temples. Nevertheless, other head areas might be affected as well, depending on the hairstyles you wear.

Apart from the development of small bumps, this condition manifests with other symptoms, such as itching, blisters, soreness, and redness of the scalp. Unless women make changes in their hairstyle on time, the ultimate results might be severely damaged follicles and a receded hairline. As mentioned above, the most common causes of traction alopecia involve wearing some hairstyles like cornrows, dreadlocks, tight ponytails, and buns, etc.

Furthermore, follicles also undergo stress by using extensions or rollers during the night. There are certain prevention tricks you can practice to avoid traction alopecia, such as wearing your hair down as frequently as possible and not using chemical treatments.

Other causes of thinning and alopecia

Hair becomes thin and starts falling out for a number of other reasons, such as stress, pregnancy, and smoking. For instance, physical and emotional stress force the follicles into a long-term telogen phase. While it’s almost impossible to avoid stress, make sure you manage your stress levels properly.

Moreover, during pregnancy, the hormones in charge of baby growth might trigger temporary alopecia. Anyhow, this condition usually lasts in the course of the first trimester and resolves on its own. Conversely, smoking is believed to shrink the blood vessels, thus impeding nutrients from reaching the follicles. Unless your follicles receive the necessary nutrients, the growth cycle is likely to be disrupted.

Hair thinning and loss can be prevented and treated if noticed on time.