In 2018, between 24 and 43 percent of Americans used a ridesharing service. Ridesharing started as an affordable and convenient trick to getting from one place to another using drivers already on the road. Now, ridesharing is a billion-dollar industry crowding out other forms of transit and threatening the integrity of the auto industry as we know it.

But could ridesharing really change transportation forever? Should you opt to not invest in personal transportation in the wake of the tsunami that is shared, autonomous, electric vehicles?

Unfortunately, the answers to these questions are a bit more complex than “yes” or “no.” Here’s what experts are predicting with regards to ridesharing and other advancements in automobiles and what transportation could look like in 10 or 20 years.

The Current State of Ridesharing

Before we can dive into the future of ridesharing and transportation, it’s important that we establish the present. Currently, ridesharing is enjoying a growth phase as more and more users recognize the benefits of ridesharing and adopt the service. In the United States, there are four prominent ridesharing providers — Lyft, Uber, Via, and Juno — with a handful of local or regional rideshares also competing. Auto manufacturers, who are just beginning to feel the sting of the car- and ridesharing, are attempting to compete by partnering with existing services or developing their own. Meanwhile, local and state governments are striving to enact regulations to ensure the safety of rideshare drivers and passengers.

Now that ridesharing has been around for a few years, research on the phenomenon has revealed a few true benefits of using the service. Most notably, several studies have identified significant energy savings and emission reductions thanks to ridesharing, especially in large, traffic-heavy cities like Beijing and Los Angeles. This is large because ridesharing allows users to opt out of a personal vehicle which in turn compels them to primarily utilize greener transportation like public transit or cycling. This also has the effect of reducing traffic congestion, which improves the quality and functionality of roads.

These benefits will only compound when ridesharing fleets shift to electric, autonomous vehicles — which has already happened in a few cities in the U.S. Driverless cars are more efficient because they can calculate optimal routes and maintain steady speeds; when the majority of cars on the road are autonomous, they might be able to communicate with one another and street lights to ensure a truly peak riding experience. 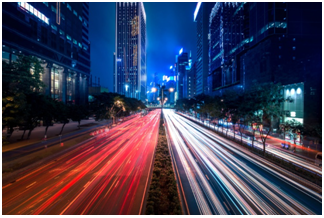 Currently, the big names in ridesharing are only getting bigger — but that doesn’t mean that the future couldn’t bring a shake-up. Thanks to convenient rideshare-building tools like customizable rideshare software, almost any entrepreneur can create an app and launch a ridesharing enterprise to compete in the marketplace. In fact, because the larger ridesharing companies continue to rack up scandals that shake consumer confidence, it is likely that a new name will emerge to corner the marketplace soon. Emerging partnerships within the ridesharing space make this prediction more likely to come to fruition. Currently, Google is developing a significant investment in Lyft, which is perhaps an attempt to merge their autonomous driving effort Waymo with Lyft’s vast and established market.

Auto manufacturers are also hoping to break into the sharing economy with the car- and ridesharing endeavors, such as GM’s Maven and VW’s Moia. Already, manufacturers have lost ground to the car- and ridesharing services, specifically when it comes to selling brand-new cars; the knowledge of new cars’ steep depreciation is more widespread, and consumers are more willing to spend that cash on rides rather than the responsibility of ownership. Because of this, manufacturers hope that building their own car- or ridesharing services now will help them maintain market share as the traditional ownership model wanes. It’s anyone’s guess whether this will work or not.

Finally, it’s indisputable that more government regulations on the ridesharing industry will emerge, especially as advanced tech like autonomousness becomes more prevalent. There are many threats to treat ridesharing companies like taxi services, which makes sense given their swift and extensive evolution toward e-hailing as opposed to true ridesharing. The most likely regulations of the future are deeper background checks and licensing requirements for drivers as well as specialized registration for ridesharing vehicles.

Ultimately, it’s hard to pinpoint what a ridesharing future will look like because at present there are so many balls in the air, from emerging technology like robot drivers to alternative fuel sources to new rideshare service providers to manufacturers’ meddling and more. It’s certain that ridesharing will be an important component within the future of transportation, but we’ll all have to wait and see what realities the ridesharing future brings.