Honesty is a quality valued in all people. We may people around us, the people we can trust are the one whom we just want an opinion on something. When one lies about the big things, the feelings of the other person gets hurt, and the same time, if one lies about the little things, himself and damage the view on others, have o you. From childhood, we are all taught many moral values one of them is to always speak the truth in our day-to-day life as it is a positive attribute.

We all know the phrase “Honesty is the best policy”; did people understand the real meaning of it?! One can think that speaking truth alone is honesty but actually it is not. There is a condition over honesty, which is to speak the truth and being honest in all situations even if it is in a great dilemma. Honesty is a sign of strength and gives you long term benefits. An honest person is always a straight forwarded one and should be loyal and do things ethically without any force. 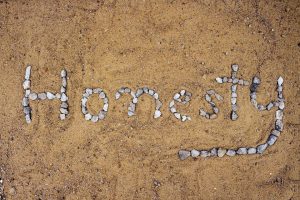 Once there lived a king along with his daughter. He had huge wealth and was always good for his people. Even though he is rich and had everything he deserved, he was worried about his daughter’s marriage. He wanted to marry his princess with a loyal person who doesn’t cheat his daughter and the kingdom. So he made an announcement that he was searching for a perfect match for a princess, there conduct a competition and whoever won the contest will be announced at the winner. Winner will be married to the princess and given the kingdom. The king also made a note that anyone can participate in this event in spite of their financial status. The people in the village don’t know what the competition is about and kept on discussing it. And the most awaited event day came. All people gathered in excitement, the king asked the participant to come one by one and pick any one seed from the bowl which kept in front of the queen. Everyone picked one, the king told them to plant the seed, water them and made it grow and bring back here 3 months from today with which they have grown from the seed, with that the king will judge and choose the winner.

The participants soon eagerly planted their seed in-home and watered it daily, days goes by, all of them were begun to talk that their seed started growing, but Ram, who was one among the participants’ seed didn’t grow. After 2 months even Ram’s seed nothing ever grew. Three months went by, all the participants came with their grownup plants. Even though his seed hadn’t grown, Ram came with his pot with the seed within. The king arrived and checked for each one’s pot. And finally, the king announced the winner as Ram. Everyone there was shocked and even Ram too. Then the king said “Three months before, I gave everyone a seed. But I gave you all boiled seeds; they were dead, it is impossible for them to grow. All of them except Ram brought me plants. When you found that the seed wouldn’t grow, you substituted another one.Ram is the only one with the courage and honesty to bring me a pot with seed in it Therefore he is the one, who I was the winner.

From this story, we came to know that if you plant honesty, you will reap trust and success. An honest person is always happy and has a peaceful mind because he doesn’t have to live with any guilt and there is no need to remember the lie which he says in order to save them. Being honest sometimes puts you into dilemma but ultimately it leads to a good destiny. Honesty builds a relationship with trust, while dishonesty is the path to trap. Honesty makes you feel satisfied and builds your self-esteem. We might face situations where it difficult to follow the path of honesty and feel the urge to lie, but if you lie once you need to lie again and again to escape from it and becomes a habit, as dishonesty is easy to follow but hard to get out of it. If we lie on someone, it may affect not only those we lie but also to ourselves so it is vital to be truthful and never lie or cheat anyone in our life.

Moreover, many things are not awkward than the secret. It is upfront and honest about everything that such a rare quality in the race of life. Still, honesty is the best policy.