It wasn’t that long ago that working in the car industry was considered as the main choice for those that were less academic; you can attach Part A to Part B? You’ve got the job.

Although there is still an element of ‘manual’ labor involved, over the years more emphasis has been placed on education, training, and academic ability. Manufacturers became aware that to make a reliable, well-engineered product, their engineers needed to understand more than ‘suck, squeeze, bang, blow’ (the four simplified stages of internal combustion). 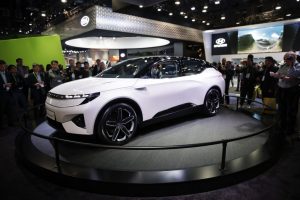 Car manufacturers have always known that car buyers were fairly simple folk – make it pretty or make it powerful and it will sell, combine them both, and you’ll hit the jackpot. But as technology grew, so did the buyers’ demands.

Analog dials were replaced by digital readouts, emissions were heavily controlled, suspension actually worked and fuel-efficiency improved; all down to technology and engineering.

Today, of course, much of the change is being brought about by environmental concern – internal combustion (as a single power source) will be outlawed by 2040 in the UK.

We now have the hybrid technology and full-electric vehicles becoming an increasingly viable form of transport, and the market for employment is expanding, but it’s been over 130 years since the first electric car production.

The Times … They are Changing

Browse through any automotive recruitment website and you’ll see ‘Engineer’ ‘Technician’ and ‘Technology’ littered throughout the advertised jobs. As car technology increases, these roles have become ever more specialized. Gone are the days of having a good understanding of the automotive product, you now need to specialize in any one area.

For example, currently advertised is a ‘Lead Power Engineer’, qualifications must include a Degree in Electrical Engineering, SEVEN years of experience, ISO 26262 functional safety experience and experience of the latest cutting-edge technology and processes.

Autonomous vehicles and other emerging technologies in the car industry are driving the development, and this means that a ‘mechanic’ simply doesn’t cut it anymore, at least not in the production environment.

Coding and programming are just as integral to the modern manufacturer as engine build and development, powertrain dynamics and NVH – the new engineers don’t necessarily need to get their hands dirty anymore, a great deal of them sit behind desks using computers with enough processing power to change the world.

Most of the larger manufacturers have their own training facilities for training employees on the latest bit of tech or development process. But even though they can help with educational needs, first you’ll still need good qualifications to gain access to them.

Of course, there is still a need for people with manual dexterity, but even that is being phased out – cars are no longer built by people, rather robots and computers, at least with the larger global manufacturers. There are fewer and fewer brands that rely on skilled technicians to build their cars.

The fact is that whatever role you’re considering, entry requirements are getting tougher.

The ‘modern’ car has changed very little over the last century – four-wheels and internal combustion have been the key ingredients for decades, tomorrow’s car is looking slightly different, but it’s reliant on the next wave of engineers to take concepts and make them work, rather than using old tech and refinement.

As Elon Musk and other visionaries are investing billions into the automotive world, working in the car industry is no longer a second-choice, something that you do because you didn’t quite reach the grade you expected. Now it’s about being at the cutting edge of technology and engineering, being able to understand complex electrical problems and putting heavy theory into practice all whilst using technology that may not have actually been invented yet – groundbreaking.

Giles Kirkland is a car expert and dedicated automotive writer researching on new technologies and future opportunities in the industry of modern cars. He passionately shares his knowledge and experience with the automotive and tech enthusiasts across the globe. You can find him at Oponeo and on Twitter.